After seeing the alarmingly low levels of English literacy among primary and secondary school students, five Malaysian youths from various academic fields had the brilliant idea of combining card games together with education.

Thus, the idea was born at the Youth Leadership Academy (YLA), a McKinsey KL initiative, and developed into what later came to be known as Edulab thanks to their passion to transform existing methods through game-based learning. Team leader and CEO Syaarveeni, who has a background in medicine, said the team wanted to fill the market gap with a product that was based on games.

We noticed that there were quite a lot of English card games in the market like Scrabble, but they mainly focused on vocabulary and spelling.

“As such, we came up with the idea of ZING!, the first-ever Malaysian English card game that focuses on helping students learn how to structure sentences in English in a vocabulary-rich and grammatically correct way.”

Speaking to WeirdKaya, Syaarveeni also shared how the team got their inspiration in designing the card game’s design and structure. 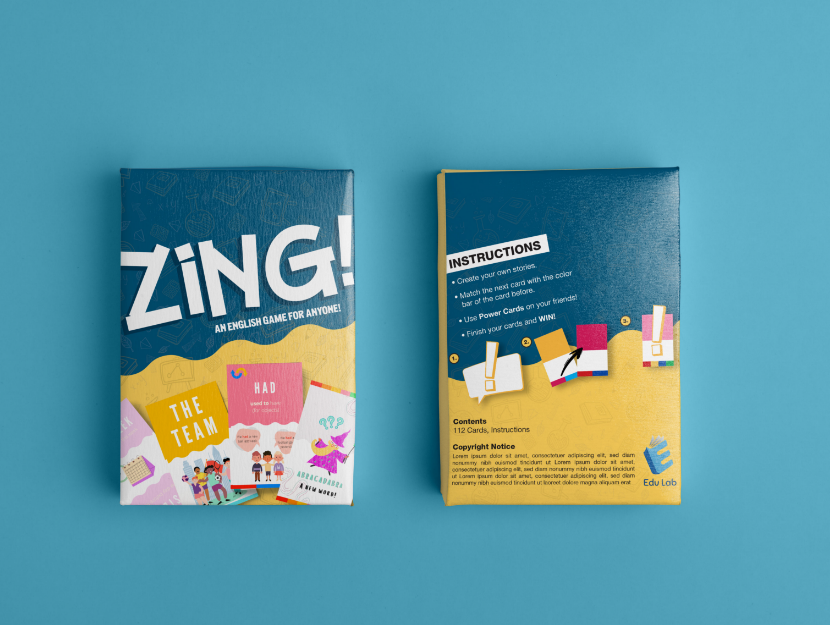 “We were largely inspired by UNO, one which many people are familiar with and find it simple to learn, and decided to incorporate it into ZING!”

To expand their initiative, they visited many Chinese and Tamil vernacular schools, tuition centres, and non-profit organisations within the first month of its launching to conduct workshops with students to help them learn English in a fun way with ZING!

The feedback we have is positive. Usually we conduct our workshops in an hour and a half, but students will sometimes beg for more,” said Mei Yan.

“One of the most remarkable highlights was a heartwarming video that students from a school in Sabah sent to us to thank us. It was so touching.”

The team has currently sold 20 sets of ZING! on Shopee, while another 60 sets were sent to schools and companies nationwide.

Speaking of the challenges in running EduLab, Chief Marketing Officer Lee Mei Yan said the most difficult part was marketing ZING! to the public as it required time to lay the groundwork.

When asked about how the team managed to juggle between this initiative with their study or work, Jia Da admitted that they had to take several leave days to run EduLab.

“It is a form of sacrifice,” he said with a chuckle. “We will continue to run this meaningful initiative even after the final pitching and we are currently recruiting more volunteers to help with our upcoming workshops.”

It’s unrelated to the article but here’s our brand-new podcast – Talk Je Lah!

The EduLab, an initiative started by Malaysian undergraduate to boost English readability

Who is The EduLab? The EduLab is a newly founded social enterprise consists of a team of five passionate Malaysian undergraduates that experienced and witnessed the struggles in English education over the past 20 years. Through their in-depth research among the urban and rural community, they have identified the two major reasons of learning gap in English among Malaysian students.

First, the difficulties of coping with multiple languages. Although the basic English literacy coverage is high among Malaysian students, the crucial English literacy  is very low. Compared to the Malay literacy rate of 71.20%, the English literacy rate was only 27.20% according to the critical literacy test conducted in year 2022. The learning gap has been worsened due to the Covid-19 pandemic where the children are unable to cope with English. Besides, the heavily-exam based education system. The recent abolishment of Ujian Penilaian Sekolah Rendah (UPSR) has brought significant positive progress of the change in education system. However, the lack of english speaking environment has became a huge barrier among Malaysian students to apply English language in their daily life, thus causing low confidence in English language among students.

The EduLab is focusing on empowering Malaysian students on improving English readability and English literacy. Being endorsed by Youth Leadership Academy (YLA) after two rounds of rigorous selection process, the five co-founders have proven their self-driven passion in serving the communities through empowering children in education. The 12-week development program that is geared towards helping undergraduate students build leadership skills and inspire others to drive change.

The EduLab has been crowned the mid-point pitch champion with the proposal of Zing! English Card Game where the first seed funding of RM1,500 is secured. As part of the program, these five students from Education theme decided to focus on the dire situation concerning low English literacy in Malaysia and promote game-based learning among Malaysian students.

One of Edulab’s mentors, Dr Yew Weng Kean, is an academician as well as a Malaysian Esports gold medallist in the SEA Games. He previously set a Malaysian Book of Record as the “First to win an Esports gold in the SEA Games” in Hearthstone, which is a digital strategy card game. Using his experience, Dr Yew was able to share the intricacies in developing a card game while coaching the Edulab team to establish their desired learning outcomes of Zing! card game.

In order to improve English readability of the Malaysian primary students, The EduLab co-founders has conducted in-depth qualitative and quantitative research where Malaysian teachers and students share their struggle on English education.

The EduLab has officially launched its first version of Zing! English Card Game Sports Ver. after two months of product development and refinement. The EduLab aligns its product delivery English curriculum to The Common European Framework of Reference for Languages (CEFR) standards. This enables students from different school curriculums and examination bodies to supplement their formal language education with The EduLab.

Social impact contributed by The EduLab, one step at a time

As of today, The EduLab has successfully onboarded government primary schools including Chinese school and Tamil school as well as tuition centre within Klang Valley area. The beneficiaries students amounted to more than 100 primary school children with significant impact on positive changes on English literacy. According to the teachers of respective schools, the average frequency of using English in daily conversations has increased by 43% two weeks after the children play with Zing! English Card Game.

More information about The EduLab can be found here in their LinkedIn page or Instagram page. With your contribution, Malaysian children will fall in love with English.